Case Rosse is located on the beautiful, unspoilt Thyrenian coast in the southern Italian region of Calabria.

The villa is situated approximately 1 1/4 hour's drive along the scenic coast road from the International Airport at Lamezia-Terme. This is served direct from the UK, as well as having frequent services both domestic and international. It also only around 3 hours drive from Naples, and around 4 1/2 hours from Rome. 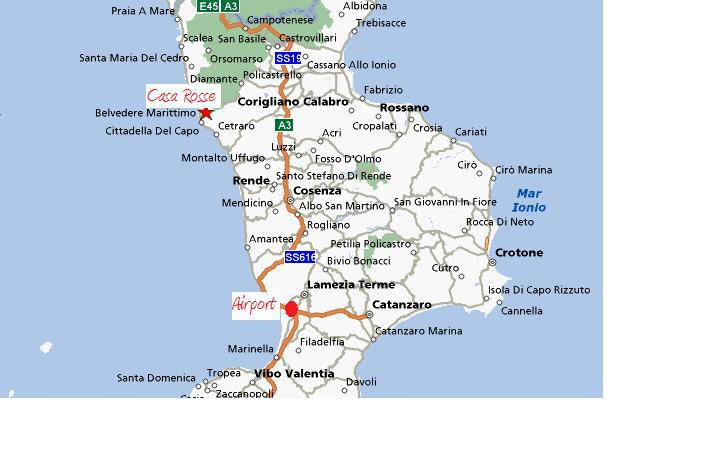 Getting to Case Rosse

By Air from the UK:

You can also fly direct to Lamezia-Terme from the New York JFK.

Direct International flights into both Lamazia-Terme. Naples and Rome are frequent and plentiful.

Domestic flights are available from all major Italian cities to Lamezia-Terme.

Casse Rosse is located just a few minutes from the mainline station at Belvedere Maritimo. From here direct services are available from Rome, Naples and northern Italy and the rest of Europe.

Bari and Brindisi are also served by Ryanair from the UK and are both just over 3 hours by road.

If you have any queries or wish to make an booking, please contact us:

Get social with us.